This is the second in a series of articles focused on classic elements of change management content, updated and augmented with my own perspectives and experience. In the first post, Strategic Risk Factors, I have provided some of the history behind this series.

It’s clear that people play various roles in change initiatives. Articulating the main roles is useful because it allows us to clearly understand and communicate the roles and responsibilities of each person involved in a project.

Almost everyone working in change management today is familiar with some version of the change role taxonomy articulated by Daryl Conner in Managing at the Speed of Change. Here’s how these roles were originally articulated:

Key Roles in the Change Process

Change Sponsor: Individual or group who has the power to authorize or legitimize change. Sponsors sanction initiatives through the use of influential communication and meaningful consequences (i.e., rewards and punishments).

Change Agent: Individual or group who facilitates the development and execution of implementation plans.

Change Target: Individual or group who must actually change.

Change Advocate: Individual or group who wants to achieve a change but does not possess legitimization power.

Triangular: In triangular relationships, the agent(s) and target(s) work for a common sponsor, but the target does not report to the agent. These configurations are often problematic—as many as 80 percent of these relationships do not function effectively. One frequently seen example of a triangular relationship is where the sponsors are senior leaders, the targets are line managers, and the agents represent a support function such as information technology or human resources. If the sponsors delegate responsibility to the agents for accomplishing the change and the agents try to tell the targets what to do or pressure them into compliance, failure is highly likely. 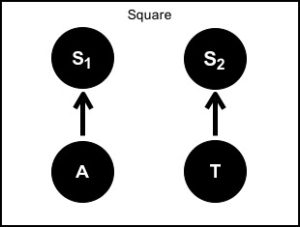 Square: In square relationships, agents report to one sponsor, and targets to another. These relationships are also frequently dysfunctional. The problems occur when Sponsor 1 directs the agent to go directly to the target(s) to implement the change (and, in the process, bypasses Sponsor 2). Because Sponsor 2 controls consequences for the target(s), the target(s) are unlikely to listen to the agent. In these situations, Sponsor 1 and the agent are actually advocates because they do not have the power to sanction the change.

One of the reasons this is a classic is that there are some important points and distinctions made here that are easy to overlook. First is the importance of sponsorship. No matter which model of change you look at, the importance of strong leadership support for change is central. Leaders can ensure that organizational resources, priorities, and consequences are aligned with the goals of change.

The distinction between agents and advocates is important, too. Although the roles can overlap, one of them is truly that of “agency”—acting on behalf of—(in this case the change agent acting on behalf of the sponsor), while the other is about an individual’s preferences and passions. When the roles are confused, agents who also have a deep personal commitment to the success of the change (that is, they are also operating as advocates) can end up engaging in effort that is not fully backed by strong sponsorship. There is a certain level of “passionate neutrality” that is required of a true agent—the willingness to be completely agnostic about whether the change goes forward or not, and to be candid with the sponsor about the level of support that is needed to succeed.

The recognition that these roles can overlap, and the importance of recognizing which role one is playing at any given time, is also valuable. Sponsors in most cases are also targets; they need to change their mindsets and behavior along with others in the organization. If we don’t acknowledge this, and fail to understand that they need to work through their own processes of resistance and commitment before they will be prepared to stand firmly during change, we risk sponsorship erosion.

Finally, I think the triangular and square political configurations encapsulate a lot of wisdom about how change can go awry—sponsors who try to delegate their responsibility to agents, and departments that initiate change affecting other functions without building the appropriate sponsor support, are unfortunately quite common and explain a lot of the challenges of initiative implementation.

However, as I look back over this model, I realize that there are a number of ways in which my thinking has shifted and evolved around how these roles are articulated.

First of all, I have continued to struggle with the “target” terminology. I do believe it’s important to think through the groups of people who will be affected by the change, and this term is a convenient shorthand, but even 25 years ago there was a feeling that this term created an unfortunately passive image of people as “recipients” of change. Although the term “stakeholders” is often used in its place, that term is quite broad, and can include anyone who has a vested interest in the outcome of the change even if they will not need to shift their thoughts and actions. Regardless of the term we use, carrying this image of “targets” around with us risks perpetuating the “we are doing it to them/they are doing it to us” mindset that so often permeates change initiatives. I recently participated in a course led by David Cooperrider on the Cooperrider-Godwin POSITIVE change platform, which is based on the Appreciative Inquiry approach, and it places a huge emphasis on engaging everyone in the design and testing of new ways of doing things. Everyone is a participant in the process. However, I think it’s somewhat unrealistic to expect that every change has the potential to engage people in this way. Sometimes we do have to do some central thinking, planning, and design, and then figure out how to bring the changes to various parts of the workforce. So I’m not sure what the answer is, but I am very clear that my thinking is now biased toward figuring out how to engage people early and often rather than figuring everything out and then “enrolling” them in the change.

Secondly, I feel that the importance of advocacy is often underestimated to an incredibly large degree. If sponsorship is about how formal power and influence are used in creating change, advocacy is about how informal power and influence are used. They need to work hand in hand. When we place the sponsors at the center of the universe, we do two things: we give the impression that change should be a “command and control” exercise, and we overlook a ton of evidence about the importance of informal influence in attitude and behavior change. There is some great work being done in the area of social network analysis, looking at key influencers, gatekeepers, etc. that speaks directly to the ways that change initiatives can make use of the naturally occurring patterns of social interaction that are the fabric of organizational life. Approaches that align the informal and formal power structures are by far the most powerful.

Thinking along these lines has led me to shift away a bit from the role taxonomy and think more in terms of the research on power and influence. Early studies by French and Raven identified 5 bases of social power (later expanded to 6, with the model continuing to be elaborated and expanded over time): coercive, reward, legitimate, referent, expert, and informational. When I put these frameworks together, I see that the sponsor role is largely defined by legitimate power combined with coercive and reward power, with effective agents often being characterized by high levels of expert and informational power. Referent power is often employed by advocates as part of their influence strategies. However, highly effective sponsors do not depend solely on their position or the rewards/punishments they can deliver, but also seek to influence through personal character, enabling others, and expertise. Agents and advocates can often deliver intangible rewards and coercion such as social approval, recognition, and opportunities to do interesting work. As a result of this line of thinking, the role definitions have become more fluid in my mind, and I find myself thinking more in terms of the ways in which the many types of power and influence are being used effectively and ineffectively during change.

I look forward to hearing your thoughts on this topic!

For the next installment in this series, click here.